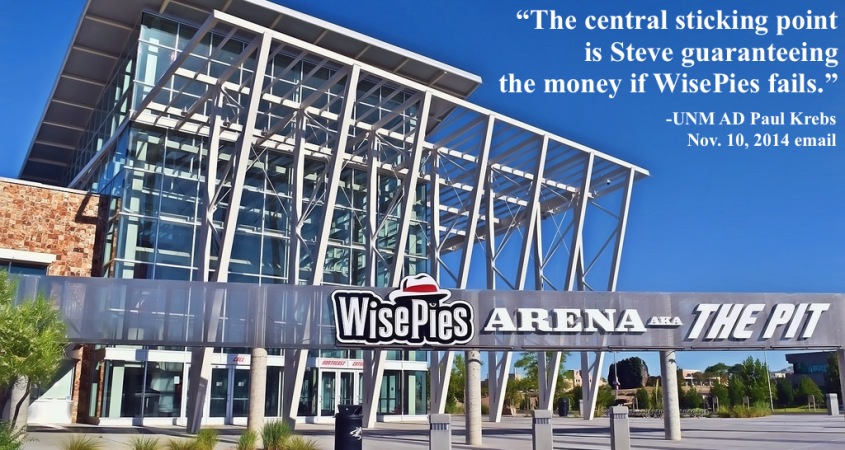 Editor’s Note: Welcome to NMFishbowl.com, an independent website dedicated to providing a circumspect look at the University of New Mexico and its athletics department.

On Dec. 1, 2014, the University of New Mexico held a press conference on the floor of The Pit to proudly announce the “largest cash gift in the history of New Mexico athletics.”

WisePies Pizza & Salads, an Albuquerque restaurant company few had heard of, would now hold the naming rights to University Arena, the Lobos’ most lucrative sponsorship asset.

Anticipating some raised eyebrows in the community, UNM officials acknowledged their difficulties in trying to secure a naming-rights partner for The Pit, four years after the completion of its $60 million renovation. Still, they insisted that the $5 million, 10-year agreement with WisePies was rock solid — even though the company was unrecognized and unproven, and the “gift” agreement was almost entirely unenforceable.

“It could not be a better marriage for all of us,” beamed UNM Athletics Director Paul Krebs.

But internal documents and emails obtained by NMFishbowl.com paint a much less optimistic picture about UNM’s trip to the altar. Indeed, they beg the question as to whether the school ever thought it would receive most of the $5 million pledged by WisePies.

On Nov. 10, 2014, three weeks before the deal was announced, Krebs emailed his boss, UNM President Robert Frank, in which he starkly laid out the concerns about WisePies:

“My understanding is [UNM’s Finance and Facilities Committee] will be discussing the WisePies agreement in executive session tomorrow.  Regent [Jamie] Koch believe this deal should be more like a contract and less like a gift agreement. Gift agreement is what we have typically done with donor naming gifts including Branch Field and the McKinnons. The central sticking point is Steve guaranteeing the money if WisePies fails.” [Emphasis added]

Koch, who retired from his post a few weeks after the deal, did not respond to a request for comment. Through a UNM athletics department spokesman, Krebs declined to speak for this story. That spokesman likewise declined to address the particulars of this story.

But, as internal documents demonstrate, UNM’s initial efforts at  “guaranteeing the money” quickly fell by the wayside as the school rushed to lock up an agreement before the end of the year.

In an earlier draft version of the naming-rights agreement, UNM initially sought to establish the “Steven B. Chavez Fund,” stipulating that Chavez would, over the ensuing decade, transfer “at least $500,000” each year from his business’ net proceeds to the UNM Foundation — the school’s fundraising arm — in exchange for The Pit’s naming rights. This version further sought to put Chavez on the hook, even if his business didn’t materialize as planned:

“Donor pledges to transmit annually [sic] net proceeds of up to $500,000 from the Franchises to the Fund and pledges to contribute cash in any year the proceeds fail to reach $500,000.”

The concerns about WisePies’ financial prospects were well warranted. Having once boasted of plans to franchise 300 stores across the southwest, the company has been in a state of constant flux.  In September, the New Mexico Department of Taxation and Revenue filed a tort injunction against WisePies, demanding that it cease business operations until it paid almost $12,000 in back taxes. That same month, the company told the Albuquerque Journal that co-owner Mike Baird would no longer be involved in the business’ day-to-day operations. It was more recently announced that Baird had sold his interest to Chavez. With each bad headline, the $5 million payout to UNM has appeared ever more enfeebled, even as the parties insist publicly that all is on track.

But those professions of confidence belie the tenor of the conversations between UNM officials leading up to the deal.

During one email exchange, on Nov. 7, 2014,  Larry Ryan, the vice president of development for the UNM Foundation, talked about the importance of having Chavez “on the hook for 500K no matter what happens and if things go well you get the whole 5 (million).”

The earlier draft version of the agreement included a specific clause that presupposed a better deal might come along:

“Steve is comfortable with this language and would like something along these lines included in the deal,” Krebs emailed Ryan. As of publication, WisePies had not responded to a request for comment though a company spokesperson.

At the same time, email correspondence raises questions about how well UNM even knew the entity it was about to make a deal with. On Nov. 12, Gene Gallegos, a UNM Regent on the F&F committee, sent an anxious message to Krebs and Frank, wondering whether school officials had done some basic due diligence.

“Bob and Paul—You might check the Wise Pies Pizza, Albuquerque website,” Gallegos wrote. “The theme of the restaurant is Mafia. No mention of Steve Chavez. Michael Baird is shown as owner. On checking with the Secretary of State there is no existing LLC under the name Wise Pies Pizza or similar name.”

Krebs responded: “Thanks you for the information about the LLC. Will look into the matter immediately.” (Gallegos chimed in a few hours later, having clarified his concerns.)

And so things proceeded. Although the F&F Committee met on Nov. 11, there was no mention of WisePies in the minutes of the meeting.

But on Nov. 14, 2014, Krebs sent a new “final” draft of the agreement to Chavez, with some notable omissions. Instead of it being named for Chavez, the gift agreement was now termed the “WisePies Fund.” Indeed, Chavez’s name was completely removed from the document. As was the contingency about a sweeter deal coming along.

Perhaps unbeknownst to Krebs, the Word attachment he sent to Chavez included an undeleted margin note from Sandy Liggett, the UNM Foundation’s general counsel, questioning whether UNM should get more money up front.

“Paul, this means that the name can be put up this December with only $100,000 in hand.  What if the naming rights were activated December 31, 2015 after the second paratial [sic] payment is in hand?

But alas,  with only $100,000 in hand, the Lobos signed on the dotted line. Now, two years later, both parties are still trying to  convince a (legitimately) wary public that theirs is a marriage, and not some one-sided fling. Earlier this month, in a move designed to “assure fans”, Chavez furnished a payment of $300,000 — half the amount he owes by Dec. 31. But even this gesture seemed only to underscore the uncertainty of the deal: after all, why not pay the full amount early?

Indeed, it increasingly seems as if the annual naming-rights payment will be another kind of Pit nail-biter. Or maybe not. At the present moment, UNM has received $500,000 from WisePies. File the remainder under: “If things go well.”