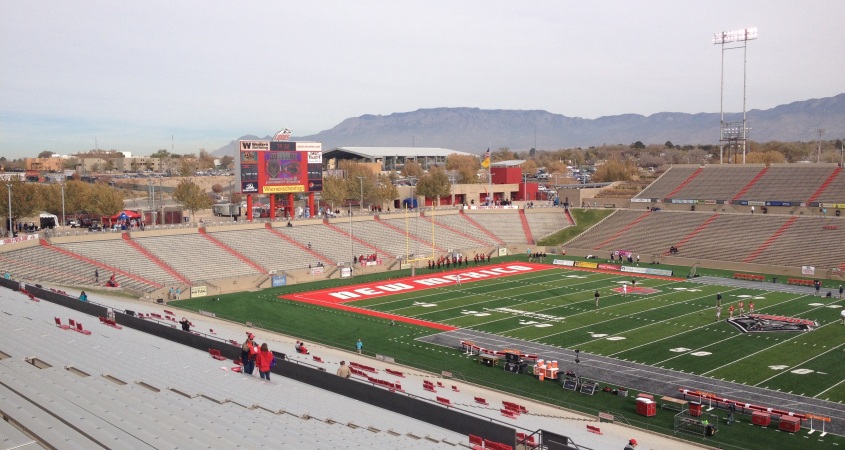 As the cash-strapped University of New Mexico Athletics Department yearns for more infrastructure, there’s a legitimate question as to whether it can afford to properly maintain that which it has.

A string of emails obtained by NMFishbowl.com indicates that, in response to last year’s budget shortfall,  the department sought to dramatically reduce the frequency of its facility inspections — a key effort in maintaining the functionality and safety of its property.

Last spring, these emails show, Athletics requested guidance from UNM’s Physical Plant Department (PPD) — which is in charge of maintaining facilities across the compass — on a list of cost-cutting measures for the “South Campus Grounds Account”. (Athletics is one of the few departments that is in charge of its own facilities, which include The Pit and University Stadium.)

PPD responded with a number of suggestions, such as switching to a different paper-and-soap supplier (projected annual savings: $2,300), reductions in the custodial staff, and the removal of two dumpsters. It also proposed, with a strong note of caution, the idea of reducing the school’s own facility inspections from weekly to monthly, for a savings of $41,800 a year.

In issuing that particular recommendation, Jeff Zumwalt, then the interim director PPD, laid out the obvious cons:

A significant loss of control of the facility equipment. The donor/contractors do not have the same incentives to conduct the PM’s properly and on time. This could lead to increased corrective maintenance costs. The reduced frequency of building inspections will increase the time between equipment failures and repairs. This is because the first step in corrective maintenance is the discovery of the failure.

A few weeks later, Scott Dotson, UNM’s Sr. Associate AD-Facilities, wrote to Zumwalt and several other school officials, saying he wanted to “move forward” with the plan to reduce facility inspections and cut the custodial staff by 20 percent (from five employees to four). When asked this week, several UNM officials and spokespeople refused to confirm or deny whether this drawdown of building oversight took place. However, in a phone conversation, Zumwalt, who is now head of facilities at the University of Kentucky, said it was his understanding that UNM proceeded with that plan.

“If I were forced to pick one way or the other I would have not reduced the inspections,” Zumwalt told NMFishbowl.com. “We are providing a service that we believe has value so we felt inspections were a smart move for Athletics.”

Zumwalt acknowledged that he is only speaking to one side of the equation, and that there might have been certain budget priorities in the Athletics Department that would have taken greater precedence.

In recent years, UNM  has run into a couple of well-publicized facility issues with its prime sports venues. In 2010, it was forced to temporarily close its football practice facility, after the fabric facade ripped during a storm. This followed an independent review of the tent-like structure, which found that its design failed to meet necessary wind-resistance standards. (UNM’s facility was installed by the same company that built the former Dallas Cowboys practice bubble, which collapsed in a storm, injuring a dozen.)

On 2012, UNM was forced to install banners around The Pit, following multiple incidents of stone tiles falling from the walls. The Pit also has endured nagging problems related to its ventilation system and fire alarms.

“Inspections are like insurance policies,” said Zumwalt. “They reduce your exposure to a negative event.  So, reducing the frequency of inspections has a corresponding increase in the risk that a small repair will become a large repair.”

One simple way to maintain resources for proper inspections is to cease trying to build more buildings. But the Athletics Department’s parsimony seems self-selective on this front. UNM is presently in the second part of a three-phase, multi-million dollar upgrade to its baseball complex. Pending funds, it has previously stated its intentions of making further upgrades to University Stadium and constructing a permanent Olympic Performance Center, at a cost of between $3 million and $5 million.