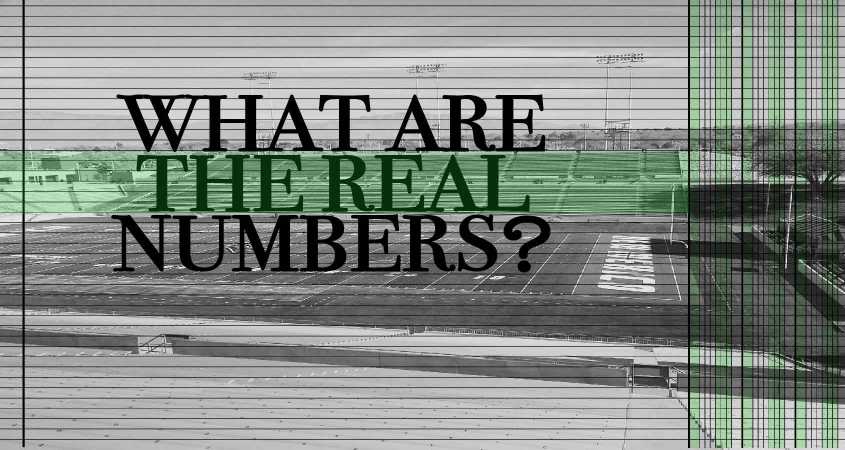 No outside party has any real or verifiable idea about how much money the UNM Athletic Department spends, what it spends that money for, and the true size of the department’s substantial budget deficit.  And that’s an enormous problem when New Mexico taxpayers are annually asked to sign a check to cover the excesses of UNM Athletics.

The financial paper trail reported by UNM’s Athletic Department is so confounding that even State Auditor Tim Keller might find it impossible to sort it all out — even though he’s suggested publicly that he’s keeping tabs.

And when those largely unaudited amounts are combined with recent allegations by a former Athletic Department staffer that the department fails to follow crucial UNM internal-accounting controls, it creates serious questions about whether UNM Athletics is an honest and  prudent steward of the millions of dollars of public funds it receives.

NMFishbowl.com recently contacted Keller to obtain his reaction to our website’s story about former UNM men’s basketball operations director Cody Hopkins, who described an Athletic Department atmosphere that played fast-and-loose with many accounting rules, and specifically alleged that it did not adhere to UNM’s Purchasing Card (P-Card) procedures.  Hopkins alleged that six other department employees had access to his P-Card, which would constitute a massive violation of UNM’s regulation that prohibits P-Card use by anyone other than the cardholder.

“First and foremost, it is always the responsibility of UNM to ensure financial controls are in place to help guard against misuse of public funds,” Keller said in a statement provided to NMFishbowl.com.  “However, even good policies can be exploited and people who break the public trust should be held accountable.  The University should use the special audit (UNM’s internal audit of Hopkins’ P-card charges) as an opportunity to fix any weaknesses in their operations to prevent this from occurring in the future.  The athletics department is audited annually, and we will monitor the steps the University takes to strengthen financial oversight.”

The final sentence of Keller’s statement fingers the core financial conundrum about the black box of Lobo sports.  The State Auditor seems to have it qualitatively wrong.  There is no annual “audit” of UNM Athletics.  Stated more precisely, there is no discrete and independent audit of UNM Athletics.

It’s important here to carefully define “audit”, because that word is typically tossed about quite loosely.  The only kind of audit that carries any sort of reliable significance is an independent financial audit conducted by an outside firm that performs a variety of examinations and tests to confirm the credibility of an entity’s financial statements.  An internal “audit” executed by UNM itself lacks the arm’s-length integrity necessary for outside parties to trust it.

The State Auditor’s office requires that public entities in New Mexico hire independent auditors each year to conduct an annual audit of their financial operations. The University of New Mexico, and its components, have regularly farmed out this work to the Albuquerque office of KPMG LLP, one of the so-called “Big Four” international firms.

You can find the various reports on the State Auditor’s website, including the most recent school-wide UNM audit for the fiscal year ending on June 30, 2016. The 171-page report states that the school presents its operations “fairly” in all material respects.

While the comprehensive UNM audit includes the Athletic Department, it appears that minimal attention was paid to Athletics because its activities comprise less than two percent of UNM’s $2.1 billion of operating expense.  In accounting terms, the Athletic Department is not “material” to UNM’s total operations, and Generally Accepted Accounting Standards would require little, if any, additional examination.

NMFishbowl.com asked UNM whether KPMG produced any other work papers or reports about the athletic department as part of their annual audit, and UNM spokesman Steve Carr said they did not.  Similarly, the State Auditor’s office said it did not possess any additional audit reports or work papers related to UNM Athletics.

But through an Inspection of Public Records Act request, NMFishbowl.com has secured a second KPMG accounting document that was prepared specifically for the UNM Athletic Department.  While this second accounting report was provided under the label of an “audit,” the document, also prepared by KPMG, explicitly states that the scope of its work does not qualify for that designation.

KPMG calls this second accounting document an “Agreed-Upon Procedures Report,” and it is singularly prepared to comply with NCAA regulations that require an outside firm to conduct at least a minimum-level review of a member institution’s internal accounting processes.  The report also checks the effectiveness of some financial-reporting controls by comparing general-ledger amounts to various supporting schedules.

However, the relatively flimsy nature of this report is revealed in the review’s very first test.  For the fiscal year ending June 30, 2016, KPMG could not even reconcile the total revenue and expense reported by the Athletic Department’s general ledger to the amounts recorded for Athletics by UNM’s Banner Report system.  The two totals disagreed by almost $700,000, and KPMG made no further effort to resolve that difference because the report’s parameters did not require it.

That same discrepancy between the revenue and expense reported for Athletics by the Banner system and the department’s in-house ledger occurred in all four years (Fiscal Years 2013 thru 2016) of the KPMG report that NMFishbowl.com obtained.  The amount of that unreconciled discrepancy fluctuated each year between $450,000 and nearly $1 million.

It may also be worth noting that no matter which Athletic Department accounting document–the University audit or the “Agreed-Upon Procedures Report”–the total balances for revenue and expense were never the same.  In Fiscal Year 2016, for example, the UNM audit says Athletics incurred $33.4 million of expense, while the Athletic Department’s general ledger says that amount is $44.2 million, and UNM’s Banner Report says the total should be $44.5 million. (Those final two numbers are cited in KPMG’s “Agreed-Upon Procedures Report.”)

“The NCAA Agreed Upon Procedures report is specific to Intercollegiate Athletics revenue & expense reporting (general ledger),” Yvonne Otts, the Athletic Department’s business operations director, said in a statement. “Our financial reports on the Banner system include all Athletics information which includes revenues & expenses that can be excluded from NCAA Agreed Upon Procedures report which could result in unreconciled differences.”

Even if the numerical inconsistencies are fully explained by these inclusions — and UNM is only saying that it “could” be — they serve to highlight the fluidity and flexibility the Athletic Department maintains in its financial reporting.  Depending upon which document its quoting from, its operational results could be almost any number.  Just pick one.

KPMG comes to a similar conclusion about the Athletic Department’s general-ledger amounts at the end of its “Agreed-Upon Procedures Report.”  They offer no opinion on those numbers.  “This report is intended solely for the information and use of the administration, and the Board of Regents of the University of New Mexico,” KPMG said on January 17, 2017, “and is not intended to be and should not be used by anybody other than these specified parties.”

When UNM Athletics self-reported its problems with Hopkins’ P-Card accounting in late 2015, Keller applauded the department’s early efforts.  “We appreciate the University of New Mexico’s work on this issue, and we are encouraged by their actions to investigate and resolve this situation,” Keller told the Albuquerque Journal in May.  “Anytime tens of thousands of public funds are unaccounted for, it speaks to an immediate need to tighten procedures, and we ask the University to adopt the recommendations in their report before the end of the fiscal year.  Better controls can ensure New Mexicans that their tax dollars cannot be used for personal shopping sprees.  We will check whether the problems have been addressed in the University’s next annual audit.”

But as this deeper dive into Athletic Department accounting indicates, it’s extremely unclear exactly how Athletics is annually “audited.”  Although NMFishbowl.com is not privy to all of the Athletics testing KPMG carries out in its comprehensive UNM audit, the detailed descriptions of its examination practices in the “Agreed-Upon Procedures Report” are not reassuring. In the Procedures Report, KPMG explained that it tested the Athletic Department’s Administrative and Other Expense categories, for example, by selecting a sample of three — yes, just three — of potentially thousands of transactions, and reconciled those to supporting documentation.  Through a company spokesperson, KPMG declined to comment for this story, saying that it had to respect client confidential agreements.

After Keller fully digested the first reports about UNM’s investigation into the P-Card problems associated with Hopkins, he tried to shore up one concern.  On September 16, 2016, his office sent a letter to KPMG, advising the firm to tighten its compliance examinations of UNM’s personnel policies, when new information emerged that Hopkins and former Associate Athletic Director Tim Cass had somehow remained on UNM’s payroll  past their reported termination dates.

That belated action suggests the possibility that Keller might crack down again on the Athletic Department’s compliance controls if fresh information arises.  Perhaps, the new trigger could be the allegation by Hopkins that Athletics is violating UNM’s P-Card policies.  Hopkins had never been allowed to publicly comment on his involvement in the P-Card episode until NMFishbowl.com published his side of the story last month. Among the things he conveyed, was the pervasive anxiety in the Athletic Department about arousing the attention of auditors.

For its part, Keller’s office stressed that it cannot assume the primary role of producing accurate financial reports for any outside entity.  The State Auditor is tasked with overseeing 9,000 different public entities throughout the state. There’s only so much he could reasonably do, in general, to serve as a backstop against bookkeeping issues for Lobo Athletics. Moreover, there are simply too many cracks that money can slip through without raising red flags in the annual audits that cross Keller’s desk.

Unfortunately, the notion of UNM Athletics as the gatekeeper for its own financial reporting is an increasingly worrisome idea.  When the Department announced last August that an “internal report” indicated a financial deficit for Fiscal Year 2016 of $1.54 million, we thought that number was about as bad as it could get.  Now, we’re not so sure.

One thought on “The Unknowns of UNM’s Accounting”