The UNM Foundation and University of New Mexico Board of Regents have now formally responded in court to our public records lawsuit, arguing, among other things, that the Foundation’s resistance to transparency is actually a defense of the First Amendment.

[You can read their filings here and here.]

In its kitchen-sink Answer to our Civil Complaint, the Foundation lists 13 affirmative defenses for why it shouldn’t have to provide documents I’ve sought (or anybody in the future may seek) under the New Mexico Inspection of Public Records Act.

The Foundation denies our claim that it is a “creature of the university” even though, as the Board of Regents acknowledges in its Answer, the Foundation “functioned as part of the University until 2008, when it transitioned to a separate and independent entity.” (We dispute its characterization of independence and separateness.)

Incredibly, the Foundation even denies that it and the University “share the same logo”. Through the aid of ocular forensics, you can judge for yourself here: 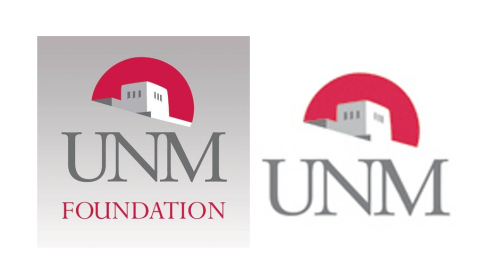 Amidst its blizzard of denials, the Foundation does admit to having deleted language that once appeared on its website, encouraging potential donors to donate through the Foundation, instead of the school itself, so that their contributions would be hidden from public view.

A spokesperson for the Foundation declined to respond to a request for comment about why this language was deleted after the Columbia Journalism Review flagged it in 2015.

Our lawsuit, filed at the beginning of March, specifically seeks records related to the troubled WisePies naming-rights agreement for University Arena. That agreement was formally made between the Foundation and WisePies owner Steve Chavez, and bears the signature of Foundation President Henry Nemcik. As NMFishbowl.com previously reported, emails obtained through public records requests showed the involvement of Sandy Liggett, the Foundation’s general counsel, in internal discussions with UNM AD Paul Krebs about how to structure the deal. However, in its court filing, the Foundation denies the “terms of the naming rights agreement were negotiated by the Foundation or by Sandra Liggett.”