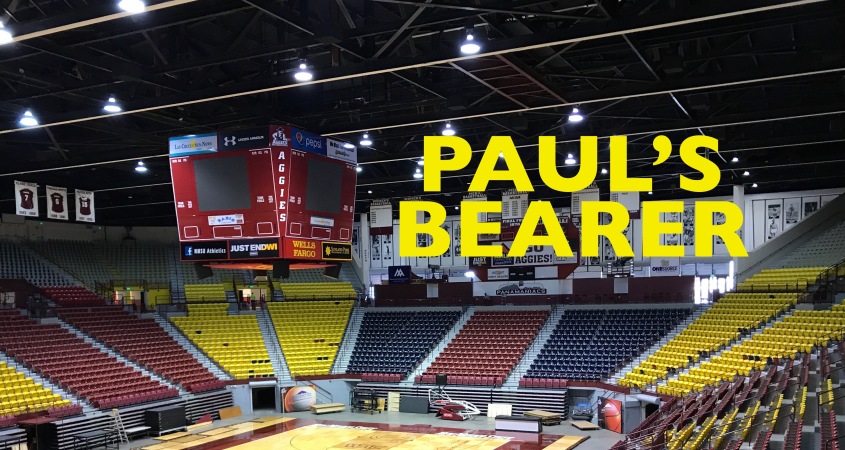 As new University of New Mexico men’s basketball coach Paul Weir commences his first season with the Lobos, he appears no closer to resolving the terms of separation with his former employer. New Mexico State University continues to maintain that Weir owes the school a $500,000 buyout, to be paid posthaste; Weir has offered half that amount, stretched out over time. The dispute has essentially been mired here since early summer.

“The employment contract with Paul Weir included a binding arbitration clause and we anticipate that the case will be decided in an arbitration proceeding,” Minerva Baumann, an NMSU spokesperson, told NMFishbowl.com in a statement this week.

Weir has lawyered up over the dispute and NMSU has likewise retained outside counsel. Recently, through a public records request, NMFishbowl.com obtained settlement correspondence between the parties, in which Weir’s attorney, Ryan Harrigan, makes some compelling assertions — perhaps some even more compelling than he intended.

At issue is Section 5.7 of Weir’s NMSU contract, “Voluntary Termination by Coach,” which stipulates that if Weir unilaterally decided to leave before his contract was complete, he would owe the equivalent of half his monthly base pay for the remaining term of his employment. NMSU is arguing that, prior to Weir accepting the UNM head coaching job on April 10, his NCAA Tournament appearance with the Aggies last season triggered an automatic one-year contract extension.

As part of its “Key Defined Terms,” the contract declares:

Thus, by NMSU’s calculations, Weir owes the school $500,000, by claiming four years remained on his contract at the time he absconded for Loboland. But in a May 11 letter to NMSU’s general counsel, Harrigan quibbles with what it legally means for an extension to “be granted.”

“The term ‘be granted’ clearly implies that an affirmative act is necessary in order for the extension to take effect,” Harrigan writes. He argues that since there has been “no writing or action by either party to indicate that an extension has been granted,” Weir’s contract was never actually extended. Therefore, at most, Weir would owe the school $375,000 for three remaining years on his contract.

The other key point of contention is how long Weir would have to pay the buyout money to NMSU. In an April 12 letter, the university’s general counsel told Weir that he owed the full separation payment within a month. But, as Harrigan correctly noted in his May 11 response, the contract failed to specify a payback date for the buyout money, in the scenario Weir voluntarily left NMSU. That’s a nontrivial screw-up on the part of NMSU, and one that presumably gives Weir some serious leverage. With that in consideration, Harrigan presented NMSU a settlement offer of $250,000, to be paid off over the course of five years. (Harrigan and Weir’s agent, Jason Charney, both declined to comment.)

By way of contrast: UNM specified in its contract with former head men’s basketball coach Craig Neal that, were Neal to voluntarily leave the job early,  he would have to pay UNM $1 million within two years. Granted, UNM made quite a few other nontrivial screw-ups in regards to Neal’s employment agreement, not the least of which was heedlessly extending after the first year. UNM also failed to put an opt-out clause in Lobo associate head coach Chris Harriman’s contract, contingent on Neal’s termination, which likely has something to do with why Harriman was kept on as Weir’s highest-paid assistant.

Last week, according to the Albuquerque Journal, NMSU called UNM’s athletic compliance department to  inquire about a recent practice Weir held for his Lobo squad at Rio Rancho High School. Weir had previously tried to do something similar at New Mexico State, according to Athletic Director Mario Moccia, but it was determined that such an event would violate one of the NCAA’s high-minded rules. In a not-so-subtle retort, Weir took to Twitter last Thursday to publicly “thank” NMSU for “making the effort to apprise us of this potential concern.”

NMSU said that it had no ulterior reason in flagging the matter with its in-state rival (and pilferer of its former coach). Aggie officials have professed that, in general, all is amicable between the school and its ex coach.

But back in May, Harrigan accused NMSU of “continuously” telling a former recruit that he was prohibited from signing with Weir at UNM. In language that invokes much grander concerns about college sports, Harrigan writes:

“While Mr. Weir’s Employment Agreement does contain a provision prohibiting Mr. Weir from seeking to recruit certain prospective student-athletes, there is no blanket provision stopping a student athlete from contacting or enrolling in UNM. New Mexico law is clear that simple non-solicitation clauses do not prohibit a customer from being the one to contact or transact business with the entity that is the subject of the non-solicitation provision.” (Emphasis added.)

To wit: the lawyer for a college basketball coach, attempting to negotiate the terms of his client’s buyout with a former school, is compelled to describe prospective high school recruits as customers seeking to transact business. (Editor’s note: This, in case one needs any more evidence of just how intellectually bankrupt the concept of major college sports amateurism is.) Weir did not respond to an email seeking his comments for this story, which included a specific query about whether he harbors similarly transactional views of the modern collegiate athlete.

The Lobos play at New Mexico State on Nov. 17.